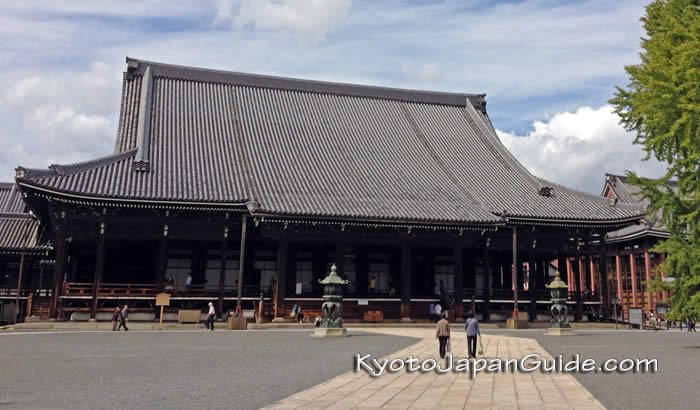 The Nishi Hongan-ji Temple halls are awe-inspiring examples of the massive wooden construction from the end of the Momoyama Period. These huge buildings are some of the largest wooden structures in Kyoto. The temple sites are an easy walk from JR Kyoto Station and are well worth the visit. 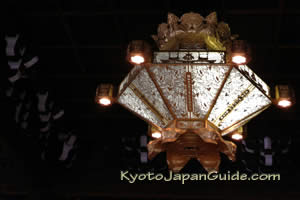 Three structures at the temple which were built around the year 1600 have special designations. The Karamon Gate,  Shoin study room, and one of the oldest Noh theater stages in Japan, are all National Treasures. 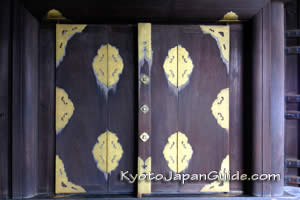 Nishi Hongan-ji Temple has a long and complicated history. An early temple was built on the site of the mausoleum of Shinran Shonin (1173-1263), the founder of the Jodo Shinshu sect of Buddhism. This sect became one of the most powerful and widespread sects of Japanese Buddhism. Many years of power struggles between the sect and powerful political leaders caused the temple to be moved to a number of locations over the centuries. The land for the current site was donated to the temple by the Japanese ruler Toyotomi Hideyoshi in 1591. Temple halls from other locations were moved to the site at that time to create the current temple. The current arrangement of the buildings and gardens dates back to 1633.

Nishi Hongan-ji Temple is famous for its Daisho-in Rock Garden. The garden is an illusion.  It appears to be a pond accented with carefully placed stones and trees. There is no water in this pond. White sand fills the space between the rocks and trees giving it a subtle 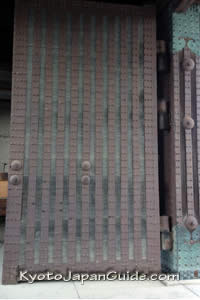 stillness. Rock gardens such as this, called karesansui, are designed as peaceful places to sit next to and meditate.

Another garden in the Hongan-ji complex is the Shosien Garden, which is several blocks east of Higashi Hongan-ji Temple. It is known for it’s autumn foliage surrounding a central pond.

Note: Higashi Hongan-ji Temple’s Amida Hall is being renovated and will be completely housed in a temporary construction enclosure until the end of 2015.

Getting to Nishi Hongan-ji Temple