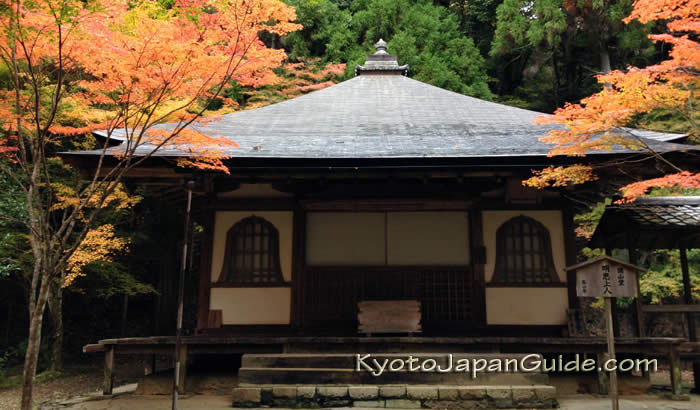 Kozan-ji Temple is located in a peaceful mountain valley in the Takao area, about one hour from JR Kyoto Station by bus. It is a one of three temples in the valley, and the one designated as a UNESCO World Cultural Heritage Site. It is famous for its four painted scrolls from the Heian Period, which are said to be the first manga in Japan, and its tea field, which is known as the oldest tea field in Japan. Another favorite attraction of the temple is the view of the Kiyotakigawa River Valley from the balcony of the temple. 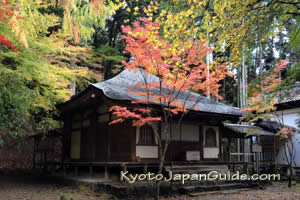 Temples in the Kozan-ji area are said to have dated back to 774, twenty years before the capital was moved from Nara to Kyoto. The current temple dates back to the early 1200s, when one of the older temples was rebuilt by a monk named Myoe. A building formerly owned by the Imperial family was also moved here at that time. This former residence is named the Sekisui-in and is now a National Treasure. All of the original buildings on the site from that time have disappeared, except for the Sekisui-in scripture hall. It is one of the last standing Kamakura period buildings in Japan.

Kozan-ji has loaned several of its National Treasures and Important Cultural Properties to the national museums in Tokyo and Kyoto.  The painted scrolls, which are National Treasures, are now in Tokyo at the National Museum. The scrolls presently housed in the Sekisui-in are exact replicas. These scrolls depict a satirical view on life in the Heian Period using cartoon characters of animals. 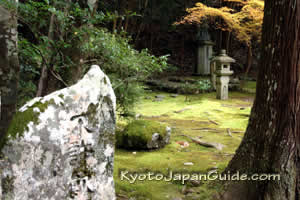 The tea field at the temple was planted by Myoe with seeds from China. Japan’s famous tea culture is said to have originated with this field.

The two other temples in the Takao area are Jingo-ji and Saimyo-ji. Jingo-ji is the largest and most popular temple of the three. Saimyo-ji is famous for is brilliant orange covered Shigetsukyo Bridge.

JR Takao bus to Toganoo (last stop, best for Kozan-ji)
(Yamashiro-Takao bus stop is 2 minutes before, and is best for Jingo-ji and Saimyo-ji)
Runs every 30 minutes
One-way fare: 500 yen (may use Japan Rail Pass) 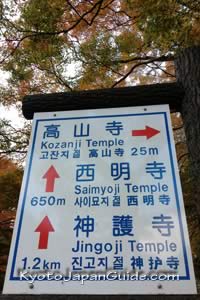