You are here: Home / Kyoto Festivals

Kyoto is fascinating at any time of the year. It especially comes alive during its world famous festivals. Full of parades and period costumes, the festivals in Kyoto are bright, colorful, exciting, and well worth your time to experience them. 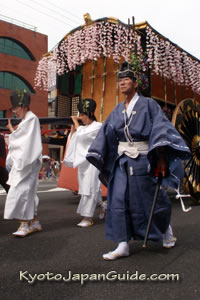 Kyoto is well known for its colorful, historic festivals. These are the four major festivals in Kyoto. 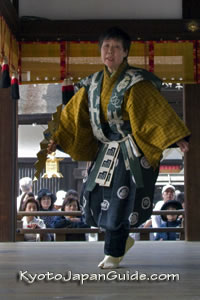 Originally a festival to release a curse of bad crops from the gods 1,400 years ago, the tradition of running horses on the temple grounds continues at the the Kamigamo and Shimogamo Shrines. Parade participants and ox carts are decorated with hollyhock leaves (aoi) and meander through the streets of Kyoto in Heian-era costumes.

This 1,100-year-old festival is one of the three largest in Japan. Originally, it was meant to ask for the restoration of health to Japan. Shijo-dori is full of people during its peak on the 17th with the Yamaboko Float Parade (Yamaboko Jyunkou).

For at least 300 years, giant Chinese characters (kanji) have been set on fire on the mountainsides of Japan every August. The legend is that it was started by a monk as a prayer to the gods. He first lit the character for “large” (dai, 大) on fire on a mountainside in view of the city. The huge figures, 80 − 160 meters in size, are all lit at the same time, and can be seen all over Kyoto.

This festival began in 1895 as the celebration of the 1,100-year anniversary of the relocation of the Japanese capital to Kyoto. A morning parade travels from Heian Shrine to Kyoto Imperial Palace. At noon, several processions travel around Kyoto City and return to Heian Shrine. As the parades pass, people wearing traditional costumes representing the last 1,000 years pass by.

Plan Ahead for Your Trip

All four of these festivals are fascinating and a favorite of photographers (especially tall ones!). You can expect to see large crowds at all of the festivals. They are very famous in Japan, and around the world.

Make sure to plan your trip well in advance to see any of these festivals. Accommodations are fully booked months in advance, especially for the Gion Festival in July. 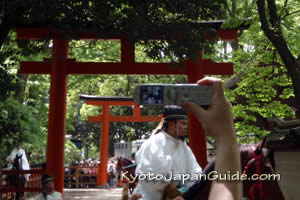 A tip for short photographers (like us!): Bring something small and light to stand on. It is not unusual to see a professional photographer with a small step-ladder in the crowd!