I’m back in Japan, just in time for sakura! 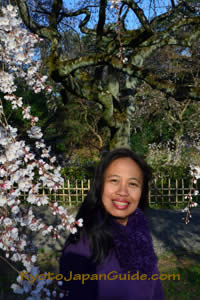 We took a walk in Kyoto to see if any sakura had bloomed, yet. We only found a few tress in bloom. There were a few weeping sakura trees, and a couple of early blooming species, but the buds on the main treas were not open yet. They will be any day now!

I have been to these gardens many times. I often plan to spend an hour or two there, but end up spending many hours! I love the open space, which is hard to find in the city, and the wide variety of trees. 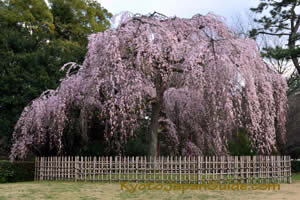 We entered the Imperial Palace grounds at the southwest corner and walked north on the left path. Very soon on the right is a very beautiful and famous weeping sakura tree. I was surprised! It is already in bloom, and close to it’s peak right now. We overheard other people commenting on its being early this year, too.

There weren’t many people there at all, which is unusual. It often blooms at the same time as most other sakura trees and is usually surrounded by crowds of people when it is in bloom. 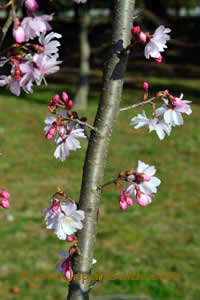 We then walked north past the plum tree garden. Most of the tress there are finished blooming, or at least well past their peak. Still, there were some nice blossoms on some trees.

We walked to the northern end of the grounds to see the grove of beautiful old weeping sakura tress, there. The trees were in a wide range of blooming phases – from tight, unopened buds, to 90% of their peak. Some years, the trees in this grove bloom around the same time. This year it looks like the gorgeous white ones that are in bloom now will be nearly finished by the time the others are in full bloom.

After shooting lots of pictures, we walked toward the north gate in a short rain shower. We walked to the Kamo Gawa River and turned south, to go to Keihan Jingumarutamachi Station.

In a week, or so, the eastern bank of the Kamo Gawa will be pink with sakura trees in full bloom, for several kilometers. Right now, the trees look bare from a distance. The few that we passed on the western bank were covered in unopened buds. Not one of them had opened.

We also saw a few weeping sakura there, too, but none of their buds had opened, yet.

We got back to the train just about dark. It was a great day – cold, with a mix of rain and blue sky! We saw some beautiful early blossoms. I can’t wait to watch the thousands of sakura buds all over Kyoto open in the next ten days!

Thank you for reading everybody! I’ll send out another report in a day, or two!
Bua