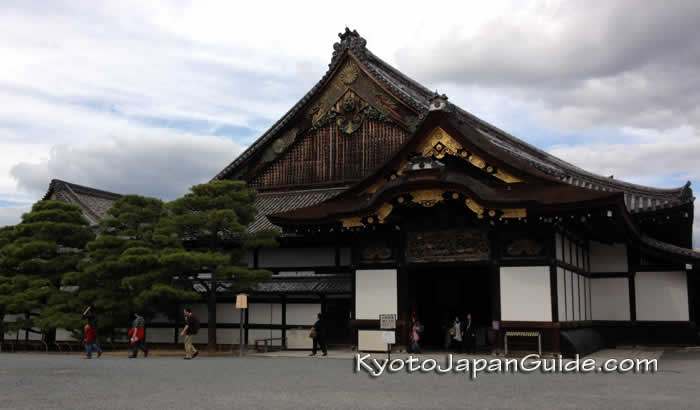 Nijo-jo Castle was originally the residence of Shogun Tokugawa Iayasu. The many buildings on the castle grounds were built over a 23-year period and were completed in 1626. The castle remained as the residence for the long line of Tokugawa shoguns until the Tokogawa Shogunate lost power in 1867. It then became an Imperial Palace until 1939 when it was given to Kyoto City.

The castle grounds are laid out inside of two rectangular moats, one inside the other. Inside the first moat is the Ninomaru Palace. It held the shogun’s quarters, offices and meeting rooms in five separate buildings connected by long corridors. Visitors entered at one end of the line of structures. How far a visitor was allowed to go into the complex depended on their status. 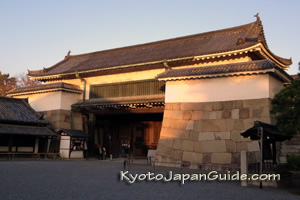 The interior design of the Palace is elaborate. Carved wood details, gold leaf, and hand painted tatami room doors decorate the buildings. This extravagance served to demonstrate the power of the shoguns to visitors.

Ninomaru Palace was built by fine craftsmen from Japanese hinoki cypress. The wooden floors of the connecting corridors were built in such a way that when someone walked on the floorboards, they creaked like the chirp of a bird. These “nightingale floors” were constructed to warn palace guards if there was an intruder. 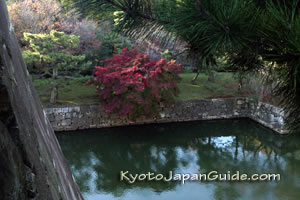 The land inside the inner moat was once the site of a five-story castle called Tenshu, and Honmaru Palace. The Tenshu was destroyed by fire caused by lightning in 1750. Several years later, in 1788, the Honmaru Palace was also destroyed by fire, this time by a large fire that burned many buildings in Kyoto. The stone foundation of the castle still remains on the property and is open to visitors.

In 1893, part of the Katsura Imperial Palace was moved to the Honmaru site and renamed Honmaru Palace. The original Imperial residential complex contained 55 buildings. Six of those buildings were moved to the Nijo-jo Castle site. Honmaru palace is open the public just a few days a year. 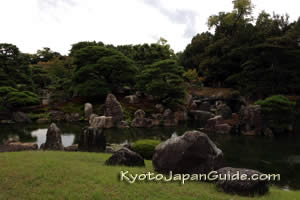 There are three gardens on the Nijo-jo Castle grounds. These gardens are known for their long spring blossom viewing season and colorful autumn leaves. Plum blossoms can be seen there in March, cherry blossoms in April, and the fall colors of maple and ginko leaves in November.

Next to Ninomaru Palace is the Ninomaru Garden, which dates back to the time original castle was built. It has a large pond that runs along the Palace complex and surrounds three islands. The pond is accentuated with numerous stones of varying sizes.

The other two gardens are newer. The Honmaru Garden was built in the 1800s. The Seiryu-en Garden was created in 1965 as an official garden for Kyoto City.

Getting to Nijo-jo Castle