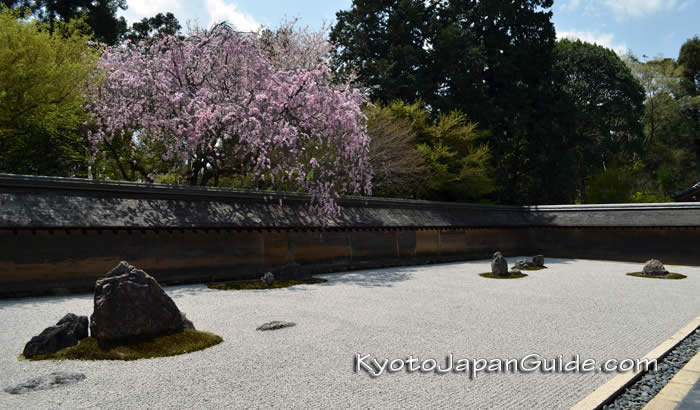 Ryoan-ji Temple is one of the most famous temples in Japan. It is known for its unique Zen rock garden. Visitors come from around the world to sit and absorb the stillness of the garden from the veranda of the Hojo, or abbot’s residence. 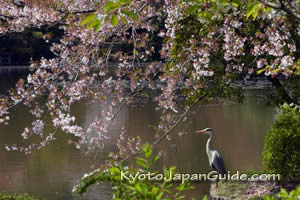 The rectangular garden is fenced on three sides with earthen walls, and open on the side facing the Hojo. The garden is covered with raked white pebbles interspersed with 15 stones of various sizes and shapes. When seated on the Hojo veranda, only 14 of the stones can be seen at any one time, no matter where you sit.

The temple property was first an 11th century estate owned by the Fujiwara family. They built the original temple and pond. In 1450, Hosokawa Katsumoto took possession of the property and established Ryoan-ji Temple. The temple was destroyed in the Onin War fires in the mid-1400s then rebuilt by Hosokawa’s son in 1488.

There are numerous versions of the history of the Ryoan-ji Zen rock garden. Though most people agree on the date that the temple was established, the date the Zen garden was built is not nearly as clear. It appears that the temple had a stone garden in the late 1600s, but this original garden looked different from the current garden. It seems likely that the current version of the garden was built in 1799 when the temple was rebuilt after another fire burned them to the ground.

There are numerous theories about the meaning of the stone placement in the rock garden, as well. Some say it is a representation of the sea and mountains, while others suggest the stones are mythical tigers in a mythical sea. One writer insists that there is no meaning to the placement of the stones, at all. He believes that they are merely randomly placed objects in a garden that provide something to focus on during meditation. Regardless of the meaning behind the placement of the stones, the garden has fascinated people for centuries with its stillness and beauty. 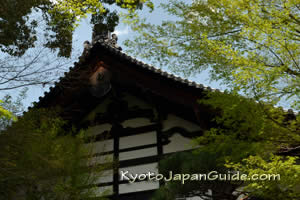 More than One Garden

In addition to the Zen rock garden, Ryoan-ji Temple also has a traditional Japanese garden with a large pond, called Kyoyo-chi Pond. It is surrounded by deciduous trees that are known for their beautiful fall colors. The pond and garden were built in the 12th century.

Getting to Ryoan-ji Temple

On Foot from Kinkaku-ji Temple