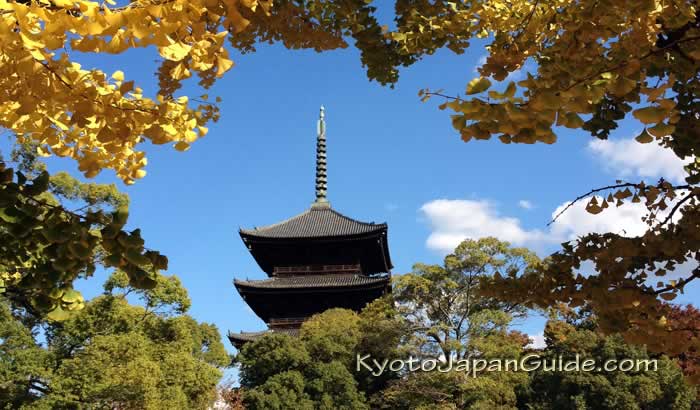 To-ji Temple was built to protect the new capital city of Kyoto. It was founded in 796, two years after the founding of the capital. To-ji, the East Temple, originally had a sister temple, Sai-ji, the West Temple, on the other side of the main gate to the early capital, the Rashomon. Only To-ji remains.

The temple became a seminary for the Shingon Buddhist sect and was very active for many years. Many Buddhist treasures are kept here. Two large halls at the temple, the Kondo and Kodo, hold a variety of Buddhist statues that are National Treasures. To-ji is one of the World Cultural Heritage Sites of Kyoto. 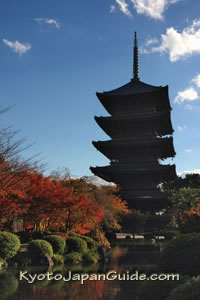 The most famous of the temple buildings is the five-story pagoda. At 57 meters tall, it is the tallest pagoda in Japan. It was first built in 826, but along with the rest of the buildings of the temple, was destroyed several times by fires and wars. The current structure was was built in 1643. The inside of the pagoda is closed to visitors most of the year, except for a few elect days.

The temple grounds contain beautiful gardens and ornamental cherry trees. It is famous for it’s weeping cherry trees, and is open in the late evening during cherry blossom season for viewing the lit “sakura” trees glowing in the darkness.

To-ji also holds several non-Buddhists activities throughout the year. There are two craft exhibits held there, one in the spring, and one in the fall. There is also a very large monthly flea market, known as the Kobo-san market, held there all day on the 21st of every month. An antique market may be found there on the first Sunday of the month.

Getting to To-ji Temple

Visitors not admitted within 30 minutes of closing time.

http://www.toji.or.jp/
(The website is in Japanese only, but it is worth a visit for the beautiful slideshows.)